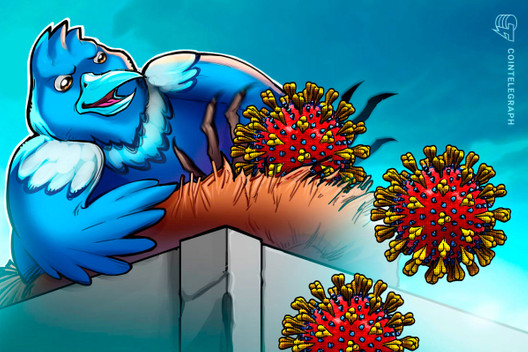 Crypto advocate Ryan Selkis believes he and his company were shadow-banned by Twitter for company’s COVID-19 coverage.

Ryan Selkis, the CEO of crypto market analysis software firm, Messari, and long-time cryptocurrency commentator, has reportedly been shadow-banned on Twitter for his coverage of the coronavirus pandemic.

Both twitter pages belonging to Messari and Ryan Selkis went offline for a number of hours. As of 2AM EST service to the pages seems to have been restored.&

Messari runs a tracking service that provides updates on the number of coronavirus cases globally, including state/provincial data for several countries.

Selkis posted to Messari’s website on March 20 announcing that both his personal and professional accounts had been shadow-banned on the popular social media platform, Twitter.

In the post, Selkis states that Messari faced “never-before-seen mass reporting of all major business and personal accounts over the past 48 hours.” The CEO adds that he believes their COVID-19 coverage on the platform was the cause of the complaints.

As a result of the shadow-banning, only Selkis’ and Messari’s followers can see their respective tweets. All other Twitter users encounter a message stating that tweets posted by these accounts are “unavailable.”

On March 21, Twitter announced that it is “working with global public health authorities to identify experts” on the subject of COVID-19 as part of an initiative to restrict the dissemination of coronavirus-related information by uncredentialed sources.

The crypto community has pushed back against Selkis’ shadow-banning, promoting his request for assistance in getting the ban lifted and vouching for his journalistic contributions to cryptocurrency.

During February 2014, Selkis broke the story that the then-leading crypto exchange, Mt. Gox, had been hacked. The exchange’s loss of nearly 750,000 Bitcoins (BTC) was one of the first major scandals in the blockchain space. The event ultimately led to the downfall of the exchange, and triggered a multi-year bear market for the industry. Six years after closing its doors, Mt Gox litigation remains unsettled.

This article was updated at 2.25AM EST as both Twitter pages belonging to Messari and Selkis went back up online.