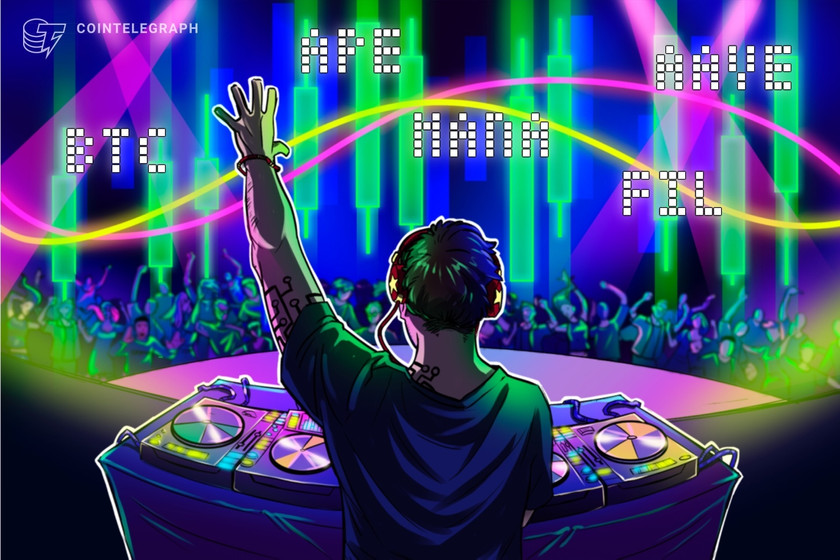 Bitcoin could take a break from its sharp rally and if its price bounces off underlying support, APE, MANA, AAVE and FIL could break out.

After nearly a 20% rally last week, Bitcoin (BTC) is on track to end this week with gains of roughly 10%. Bitcoin’s rally has improved sentiment and attracted buying in several altcoins. This sent the total crypto market capitalization firmly above the $1 trillion mark.

The strong recovery in Bitcoin has startled several analysts who remain skeptical about the rally. Some believe that the current rise is a dead cat bounce that will reverse direction sharply, while others see similarities between the current rally and the 2018 bear market recovery.

Although traders should be ready for any eventuality, the pace of the rise in Bitcoin does point to a possible major bottom. There are likely to be bumps down the road but the dips are likely to be aggressively purchased by traders.

Let’s study the charts of Bitcoin and select altcoins that are showing strength in the near term.

Bitcoin climbed above the $21,650 overhead resistance on Jan. 20, indicating the resumption of the up-move. This shows that demand remains strong at higher levels.

The bulls pushed the price above the $22,800 resistance on Jan. 21 but failed to build upon the breakout as seen from the long wick on the day’s candlestick.

While the upsloping moving averages indicate that bulls are in command, the relative strength index (RSI) in the overbought territory warrants caution. It suggests that a few days of consolidation or minor correction is possible.

However, when a new uptrend starts, the RSI sometimes tends to remain in the overbought zone and frustrates the bears. If that happens, the uptrend may continue without a major pullback and the pair could reach $25,211.

On the downside, the first support is at $21,480. If the price rebounds off this level, it will suggest that the bulls are buying on every minor dip. That could increase the likelihood of a rally to $25,211.

The four-hour chart shows that the bulls are trying to flip the $22,800 level into support. If the price continues higher and soars above $23,271, the bullish momentum could pick up and the pair may rush toward $25,211.

If the price turns down and breaks below $22,600, the pair could slide to the 20- day exponential moving average (EMA). This level may act as a support but if bears manage to pull the price below it, the next stop could be $21,480.

ApeCoin (APE) has been range-bound between $7.80 and $3 for the past several months. After the bears failed to sink the price below the range, the bulls are attempting a comeback. They will try to propel the price to the resistance of the range.

The upsloping moving averages and the RSI in the overbought area suggest that buyers have the upper hand. There is a minor resistance near $6.40 but if buyers bulldoze their way through it, the APE/USDT pair could surge to $7.80. This level may witness aggressive selling by the bears.

The positive view could invalidate in the near term if the price turns down and breaks below the 20-day EMA ($4.80). That could sink the price to the 50-day simple moving average ($4.17).

The four-hour chart shows that the pair is in a strong uptrend. The bears are trying to stall the up-move at $6 but a positive sign is that the bulls have not given up much ground. This indicates that every minor dip is being purchased. The bulls will now try to propel the price above $6 and resume the uptrend.

On the contrary, the bears will try to pull the price below the 20-EMA. If they succeed, the pair could attract profit-booking from the short-term bulls. The pair could then tumble to $5.

The bears sold the break above $0.74 on Jan. 17 but the bulls stepped in and bought the dip at $0.61. This shows that the sentiment remains positive and traders are viewing the dips as a buying opportunity.

The bulls will have to sustain the price above $0.74 to signal the start of the next leg of the recovery. The MANA/USDT pair could surge to $0.87 and thereafter to the psychological barrier at $1.

If bears want to gain the upper hand, they will have to sink the price below $0.61. If they do that, the pair could start a deeper correction to $0.53.

The four-hour chart shows the formation of an inverse head and shoulders pattern. If buyers thrust the price above the neckline of the pattern, the setup will complete and the pair could spurt toward the target objective at $0.93.

Contrarily, if the price turns down from the current level and breaks below the moving averages, it will suggest that the bears are fiercely guarding the $0.74 resistance. The pair could then plunge to the $0.61 to $0.55 support zone.

The upsloping 20-day EMA ($74) and the RSI in the overbought region suggest that bulls have the edge. This advantage could strengthen further with a break above $92. The AAVE/USDT pair could then rally to the psychologically crucial level of $100.

This level may again pose a strong challenge to buyers but if they overcome this obstacle, the pair could skyrocket toward $115.

Contrary to this assumption, if the price turns down and dives below the downtrend line, it will signal that bears are active at higher levels. The advantage may tilt in favor of the bears on a slide below the 20-day EMA.

The four-hour chart shows that the bears are defending the zone between $88 and $91 but they haven’t been able to pull the price below the moving averages. This indicates a bullish sentiment where traders are buying the dips.

The bulls will make one more attempt to clear the overhead zone. If they can pull it off, the pair could resume the uptrend.

Instead, if the bulls fail to push the price above $91, the bears will try to tug the pair below the moving averages. The pair could then fall to $78 and later to $73.

The moving averages have completed a bullish crossover and the RSI is in the overbought space, signaling that bulls are in control. The FIL/USDT pair could rally to $6.50 where the bears may again mount a strong defense. If bulls kick the price above this level, the up-move could reach $9 with a brief halt near $7.

The 20-day EMA ($4.24) is the important support to watch out for on the downside because a drop below it could tilt the advantage in favor of the bears.

The bears tried to stall the relief rally at $5 but the bulls pierced this resistance and started the next leg of the recovery. The upsloping moving averages and the RSI in the overbought zone indicate that bulls are firmly in the driver’s seat. Buyers will try to nudge the pair toward $6.50 and then $7.

On the downside, the 20-EMA is the critical support to pay attention to. If the price rebounds off this level, it will indicate that the uptrend remains intact. On the other hand, if bears drag the price below the moving averages, the pair could collapse to $4.20.