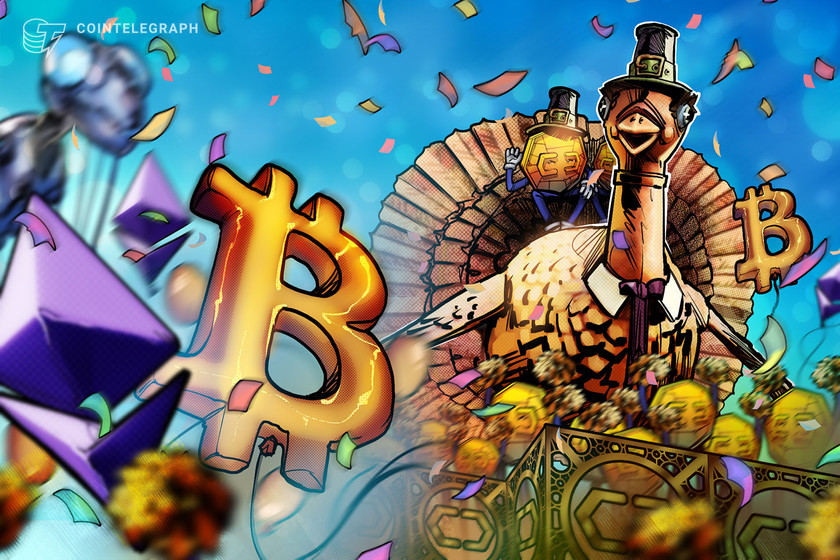 The Cointelegraph team has come up with a humorous guide for readers to employ with crypto skeptics and curious people while home during the holidays.

This week in the United States, millions of people comprising various political and financial backgrounds are traveling to see family members for the first time in months to celebrate Thanksgiving.

For crypto-minded individuals, questions about the market may come as quickly as “Why did you cut your hair?” or “Why didn’t you become a doctor?” — especially given the very public collapse of major exchange FTX and soured reputation of its former CEO, Sam Bankman-Fried. The Cointelegraph team has put together a humorous “how to” guide for U.S. readers to reference when interacting with crypto skeptics and curious people while at home, though hodlers in other countries may find a few helpful tips as well.

Despite all the three-letter acronyms they’ve heard on the news, family members might have a difficult time believing that the former CEO of FTX is not, in fact, a ticker symbol — though someone did launch an SBF Goes to Prison (SBFP) token on Nov. 21 that has fared slightly better than the exchange and its leadership, dropping more than 66% in price. “SBF” stands for “Sam Bankman-Fried,” who led the now infamous FTX to become one of the most prominent companies in the crypto space before its bankruptcy.

Bankman-Fried resigned on Nov. 11, the same day FTX filed for bankruptcy. He currently resides in the Bahamas, and there has been no shortage of stories and rumors about the former executive and his relationship with staff. SBF might be extradited to the United States to face questioning by government officials and potential criminal charges.

“Why didn’t you make money from those cartoon monkeys?”

Many in the crypto space and beyond have suggested that the nonfungible token, or NFT, market is in a bubble, but use cases for the technology go far beyond projects like Bored Ape Yacht Club — which is responsible for many of the images family members see when NFT stories go mainstream. Explaining that NFTs can provide authentication for digital and physical products may seem less important than swiping the last of the sweet potatoes from the dinner table, but if readers are looking for a relatable example to use at home, try this:

Whatever your political leanings may be, no one can deny that Democratic Senator Elizabeth Warren is among the loudest anti-crypto voices in Congress. In a Nov. 22 Wall Street Journal op-ed, the Massachusetts senator said the situation with FTX should be a “wake-up call” for regulators to enforce laws on the crypto industry in addition to associating digital assets with money laundering and ransomware attacks. Many in the space have criticized the senator for taking an “all or nothing” approach to digital assets, often failing to distinguish between front-facing centralized exchanges and decentralized projects building on the blockchain.

What your older family members see when you’re trying to explain crypto to them: pic.twitter.com/rP1ooVqFCT

Despite the current crypto bear market, many industry proponents are not causing their companies to fold, cashing in all their digital asset holdings and burning any merch bearing the Bitcoin (BTC) logo. In fact, many experts agree that the state of crypto regulation and legislation in the United States needs to be addressed soon. And had there been more regulatory oversight of Bankman-Fried and FTX, the resulting market impact might have been less severe.

Politicians from across the spectrum, including Texas Senator Ted Cruz and former Democratic presidential candidate Andrew Yang, have openly supported crypto and blockchain, but their parents probably don’t ask them when they’re going to “get a real job” over the holidays.