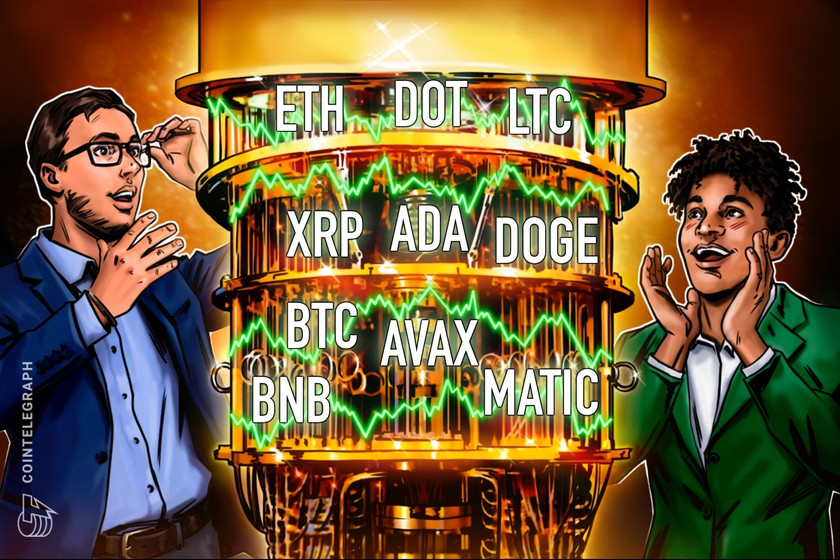 Bitcoin and altcoins appear to have shaken off the Genesis bankruptcy news by bouncing off their immediate support levels and rallying higher.

The United States equities markets are on track to finish the week in the red but that has not resulted in a deeper loss for Bitcoin (BTC). The news of cryptocurrency lender Genesis filing for Chapter 11 bankruptcy also did not have any meaningful impact on Bitcoin’s price. This shows that the selling pressure could be reducing.

However, trading firm QCP Capital warned in the latest edition of its regular markets newsletter that the current recovery in Bitcoin was only a bear market relief rally. They anticipate this recovery to be followed by another bout of selling which could sink the price of Bitcoin and Ether (ETH) below their 2022 low. QCP used the Elliott Wave analysis to arrive at this conclusion.

After an extended bear phase, the price action always climbs a wall of worry during the initial days of a new bull market. At that time, several analysts remain in disbelief as they keep expecting the price to move lower but traders could catch a change in trend if they keep an eye on the formation of higher highs and higher lows.

Are Bitcoin and select altcoins showing signs of a bottom formation? Let’s study the charts of the top-10 cryptocurrencies to find out.

Bitcoin’s price has been trading in a tight range between $20,400 and $21,650 for the past few days. Usually, a tight consolidation near a stiff resistance is a positive sign as it shows that traders are not rushing to book profits.

The upsloping moving averages and the relative strength index (RSI) in the overbought zone indicate that the path of least resistance is to the upside. Buyers will have to drive and sustain the price above $21,650 to signal the resumption of the up-move. The BTC/USDT pair could then start its journey toward $25,211.

Conversely, if bears do not allow the price to rise above $21,650, several traders who may have purchased at lower levels could be tempted to book profits. The selling could magnify on a break below $20,400.

The next support on the downside is the 20-day exponential moving average ($19,268). If the price rebounds off this support, the bulls will again try to clear the overhead hurdle at $21,650 but if the 20-day EMA cracks, the correction could extend to $18,388.

The sellers tried to start a deeper correction in Ether but the bulls purchased the dip near $1,500 on Jan. 18. This shows that the bulls are buying on minor pullbacks.

The bulls will try to propel the price above the overhead resistance zone between $1,610 and $1,680. If they succeed, the ETH/USDT pair could move to $1,800. This level may again act as a barrier but if bulls overcome it, the pair could reach $2,000.

If bears want to weaken the momentum, they will have to defend the overhead zone and yank the price below $1,500. The pair could then slide to the 20-day EMA ($1,428), which may attract buyers.

BNB (BNB) bounced off the 20-day EMA ($281) on Jan. 19 but the bulls are struggling to sustain the momentum as higher levels are attracting sellers.

The zone between the 20-day EMA and the 50-day SMA ($268) is an important one to keep an eye on because if the price turns up from it, the bulls will again try to thrust the BNB/USDT pair above $318. If they do that, the pair will complete a bullish inverse head and shoulders pattern.

On the other hand, if the price continues lower and breaks below the moving averages, it could clear the path for a possible drop to $240 and later to $220.

Buyers will try to maintain the tempo and push the price to the overhead resistance at $0.42. This is a key level for the bears to defend because if it gets taken out, the XRP/USDT pair could surge to $0.51 as there is no major obstacle in between.

The bears are likely to have other plans as they will again try to pull the price below the moving averages. If they manage to do that, the pair could plummet to the support line where buying may emerge.

Cardano (ADA) turned up from the support line of the flag pattern on Jan. 19, which is a positive sign. Buyers will try to propel the price above the flag to signal the start of the next leg of the up-move.

On a break above the flag, the bears may mount a strong defense at $0.37 but if bulls overcome this barrier, the ADA/USDT pair could soar to $0.44. This level may again prove to be a sticking point for the bulls.

This positive view could invalidate in the near term if the price turns down and plummets below the flag. That could attract further selling from short-term traders and the pair may slump to the 50-day SMA ($0.29).

Buyers attempted to kick Dogecoin (DOGE) above $0.09 on Jan. 18 but the bears aggressively protected the level as seen from the long wick on the day’s candlestick.

The bulls held the 20-day EMA ($0.08) support on the downside but the weak bounce on Jan. 19 and Jan. 20 indicates hesitation to buy aggressively. This may embolden the bears who will try to sink the DOGE/USDT pair below the 20-day EMA.

If they do that, the pair could tumble to the strong support near $0.07. The flattening 20-day EMA and the RSI just above the midpoint indicate a possible range-bound action in the near term.

If bulls want to maintain their advantage, they will have to clear the hurdle at $0.09. The pair could then start its northward march to $0.11.

Polygon (MATIC) is trading inside the large range between $0.69 and $1.05. Generally, in a well-established range, traders buy near the support and sell close to the resistance.

That is what happened with the MATIC/USDT pair which turned down from the overhead resistance at $1.05. The first line of support is at the 20-day EMA ($0.90). Buyers held this level on Jan. 19 but they will need to propel the price above $1.05 to start a new up-move.

Alternatively, if the price breaks below the 20-day EMA, it will indicate that the pair may extend its stay inside the range for a few more days. The short-term advantage could tilt in favor of the bears on a break below the 50-day SMA ($0.86).

Litecoin (LTC) sprung back from the 20-day EMA ($81) on Jan. 19, indicating that the bulls are viewing the dips as a buying opportunity.

The bulls will try to propel the price to $91 where they may run into strong resistance by the bears. If the bulls bulldoze their way above $91, the LTC/USDT pair could accelerate and reach the psychologically important level of $100 and then $107.

Another possibility is that the bounce fizzles out and does not rise above $91. That could increase the likelihood of a break below the 20-day EMA. The pair could then collapse to the breakout level of $75.

Polkadot (DOT) continues to witness a see-saw battle near the downtrend line. This indicates that lower levels are attracting buyers but the bears are selling on rallies.

The rising 20-day EMA ($5.34) and the RSI in the positive territory suggest that the uncertainty may resolve in favor of the bulls. The buyers will have to thrust the price above $6.53 to take charge. If they can pull it off, the DOT/USDT pair could soar to $7.42 and thereafter to $8.05.

Contrary to this assumption, if the price turns down and dives below the 20-day EMA, it will indicate that bears have overpowered the bulls. That could pull the price down to the 50-day SMA ($5).

Avalanche (AVAX) turned down from the resistance line on Jan. 14 but the bears failed to pull the price to the 20-day EMA ($14.72). This suggests that the sellers may be losing their grip.

Buyers will make one more attempt to drive the price above the resistance line. If they succeed, the AVAX/USDT pair could pick up momentum and rally to $22 and thereafter to $24. The rising 20-day EMA and the RSI near the overbought zone indicate advantage to buyers.

This positive view could be negated in the short term if the price turns down and plunges below the 20-day EMA. That could attract further selling and the pair could then extend its decline to the 50-day SMA ($13.09).