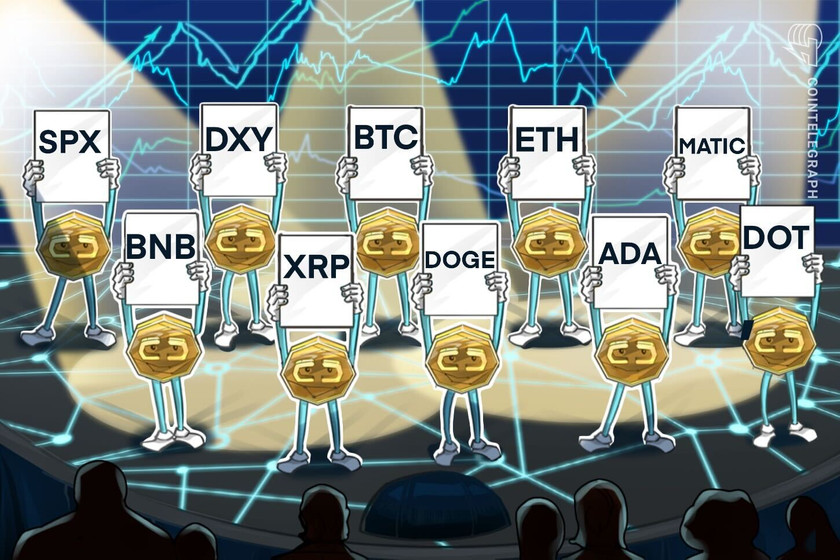 The rally in stocks could be giving Bitcoin price a boost and the crypto market could see more fireworks if the Fed confirms investor expectation that rate hikes will slow down.

Bitcoin’s (BTC) price has risen about 37% year-to-date and is not showing any signs of slowing down. The S&P 500 index (SPX) has also made a winning start to the year but has seen a relatively muted rally of roughly 4%.

While the price of risky assets is rising, the United States Dollar Index (DXY), perceived as a safe haven, extended its downtrend, falling more than 1% in January.

The change in sentiment toward risky assets may have been triggered by expectations that the U.S. Federal Reserve could slow down its rate hikes as inflation cools off. Some analysts even expect the Fed to pivot and start cutting rates before the end of the year.

Several analysts remain skeptical about Bitcoin’s rally but the longer the price sustains above $20,000, the greater the possibility that the macro low may have been made in November. If the next decline forms a higher low, it could further confirm that the worst may be behind us.

Could the rally in Bitcoin and altcoins witness profit booking in the next few days? Let’s study the charts to find out.

The S&P 500 reversed direction from the downtrend line on Jan. 18 and plunged below the moving averages on Jan. 19 but the bears could not sustain the lower levels.

The bulls purchased the dip on Jan. 20 and pushed the price back above the moving averages. Buyers built upon this strength and are trying to clear the overhead obstacle at the downtrend line on Jan. 23. If they manage to do that, it will suggest a potential trend change. The index may soar to 4,325 with a minor pit stop at 4,100.

Contrary to this assumption, if the index fails to sustain above the downtrend line, it will suggest that bears are active at higher levels.

A break below 3,885 could tilt the short-term advantage in favor of the sellers. The index may then decline to 3,764.

The U.S. Dollar Index (DXY) continues to be in a downtrend. Buyers tried to start a recovery on Jan. 18 but the bears did not relent.

The downsloping moving averages and the relative strength index (RSI) in the negative territory indicate that bears are firmly in the driver’s seat. Buyers may try to defend the support line of the descending broadening wedge pattern but could face strong selling at the 20-day exponential moving average (EMA) of 103.

On the downside, buyers are likely to guard the psychological level of 100 because if this support cracks, the selling could intensify and the index may tumble to 97.

The first sign of strength will be a break above the 20-day EMA. That could open the doors for a possible rally to the resistance line of the wedge.

Although the upsloping moving averages indicate advantage to buyers, the RSI in the overbought territory cautions that a minor correction or consolidation is possible. For that to happen, the bears will have to pull and sustain the price below $22,292. The BTC/USDT pair could then slide to $21,480.

Conversely, if buyers propel the price above the $23,078 to $23,371 resistance zone, the pair could accelerate to $25,211. The bears may mount a strong defense at this level, which could lead to a short-term correction.

Ether’s (ETH) price is facing rejection at $1,680 but a positive sign is that the bulls have not ceded ground to the bears. This suggests that the short-term traders are holding their positions as they anticipate the up-move to continue.

The rising 20-day EMA ($1,483) and the RSI in the overbought territory suggest the path of least resistance is to the upside.

A break and close above $1,680 could start the journey to $1,800. This level may again act as a resistance but if bulls do not allow the price to slip below $1,680 during the next pullback, the likelihood of a rally to $2,000 increases.

This positive view could invalidate in the near term if the price turns down from the current level and slumps below the 20-day EMA. The ETH/USDT pair could then remain range-bound between $1,352 and $1,680 for some time.

BNB’s (BNB) relief rally is facing selling near the overhead resistance at $318 but the bulls have not ceded ground to the bears. This suggests that buyers are not rushing to the exit as they expect the price to rise above $318.

The upsloping 20-day EMA ($287) and the RSI in the positive zone indicate that bulls have the upper hand. If buyers thrust the price above $318, the BNB/USDT pair could accelerate to $360 as there is no major resistance in between.

If the price turns down sharply from the current level, the pair could drop to the 20-day EMA. This level may attract strong buying by the bulls. If the price rebounds off the 20-day EMA, the buyers will again try to clear the overhead hurdle at $318 and resume the uptrend. The short-term advantage could tilt in favor of the bears on a break below the 50-day simple moving average (SMA) of $269.

After a shallow two-day pullback, buyers pushed XRP (XRP) above the stiff overhead resistance at $0.42 on Jan. 23. This indicates that every minor fall is being purchased.

The 20-day EMA ($0.38) is sloping up and the RSI is near the overbought region, indicating that bulls are in command. However, the bears may not surrender easily and will try to defend the $0.42 level with all their might because if this level gives way, the XRP/USDT pair could quickly jump to $0.51.

If the price fails to sustain above $0.42, the bears will try to pull the pair below $0.39. If that happens, the possibility of a break below the 20-day EMA increases.

Dogecoin (DOGE) continues to face selling above $0.09 but the bulls are not willing to abandon their effort.

The moving averages have completed a bullish crossover and the RSI is in the positive territory, indicating advantage to buyers. If the price sustains above $0.09, the DOGE/USDT pair could surge to $0.11. This level may act as a formidable barrier and the bulls may find it difficult to ascend it in the near term.

If the price fails to sustain above $0.09, short-term traders may book profits and that could sink the pair below the moving averages. The pair may then decline to the support near $0.07.

Cardano (ADA) continues to move up gradually, but the bears are trying to stall the recovery near $0.38. If the price turns down from the current level, it could slump to the 20-day EMA ($0.33).

This is an important level to watch out for because a strong rebound off the 20-day EMA will suggest a change in sentiment from selling on rallies to buying on dips. The bulls will then make another attempt to overcome the barrier at $0.38. If they are successful, the ADA/USDT pair could soar to $0.44.

If bears want to gain the upper hand in the near term, they will have to yank the price below the 20-day EMA. The pair could then decline to the 50-day SMA ($0.29).

The bulls tried to propel Polygon (MATIC) above the overhead resistance of $1.05 on Jan. 21 but the bears did not budge. Although the bears have successfully defended $1.05 in the past few days, they have not been able to tug the price below the 20-day EMA ($0.93).

The upsloping 20-day EMA and the RSI in the positive zone suggest that bulls have a slight edge. The repeated retest of a resistance level tends to weaken it. If the price turns up from the current level, the prospects of a break above the overhead resistance improve. The MATIC/USDT pair could then jump to $1.16 and thereafter to $1.30.

Contrarily, if the price turns down from the current level, the bears will sense an opportunity and try to drag the pair below the 20-day EMA. If they can pull it off, the pair may remain stuck inside the $0.69 to $1.05 range for a while longer.

Polkadot (DOT) formed a Doji candlestick pattern on Jan. 21 and Jan. 22, indicating indecision among the bulls and the bears about the next move.

That uncertainty resolved to the upside on Jan. 23 with a break above $6.50. If buyers sustain the price above this level, the DOT/USDT pair could first rise to $7.42 and if this level is taken out, the rally could touch $8. The upsloping moving averages and the RSI in the overbought territory indicate that bulls are in control.

The important level to watch on the downside is the 20-day EMA ($5.63). Sellers will have to sink the price below this support if they want to make a comeback.