The crypto market saw some resurgence between 27 July and 28 July. Bitcoin [BTC] was vital to the tremendous price uptick as the market crossed the $1.05 trillion market cap per CoinMarketCap. The market cap gained over 7% from 27 July. However, that was not where it ended.

Bitcoin also contributed its quota as the entire crypto market hit a weekly high in terms of volume. It was $93 billion at press time—a number it has not hit since the week started on 25 July.

Similarly, other altcoins were not left out. Ethereum [ETH] gained 10.50%, and Polkadot [DOT] increased by 11.48% within the same period.

Before this rise, BTC had rumbled earlier. This same week, the price dropped from $22,000 and almost lost the $20,000 support. However, the road to resurgence did not start on 28 July. BTC had been moving slowly up the chart since the late hours of 26 July.

Despite that, the increase wasn’t enough until the last 24 hours. At press time, BTC was close to reclaiming $23,000, trading at $22,920. So how influential was the crypto king in this recent bullish move?

After losing a 39.76 billion volume reach on 26 July, BTC looked to climb up the ladder again. This it did, as it went from 25.5 billion to 31.85 billion in the last 24 hours. Likewise, it followed the same move with its market cap.

As of the same 26 July, the BTC market cap was $399.46 billion. At the time of this writing, it had increased to $436.96 billion, confirming that it was instrumental to the crypto market’s upswing.

It also seems that Bitcoin buyers have been adding to their bags. According to Glassnode, addresses with over 10,000 BTC have increased remarkably over the past few days. 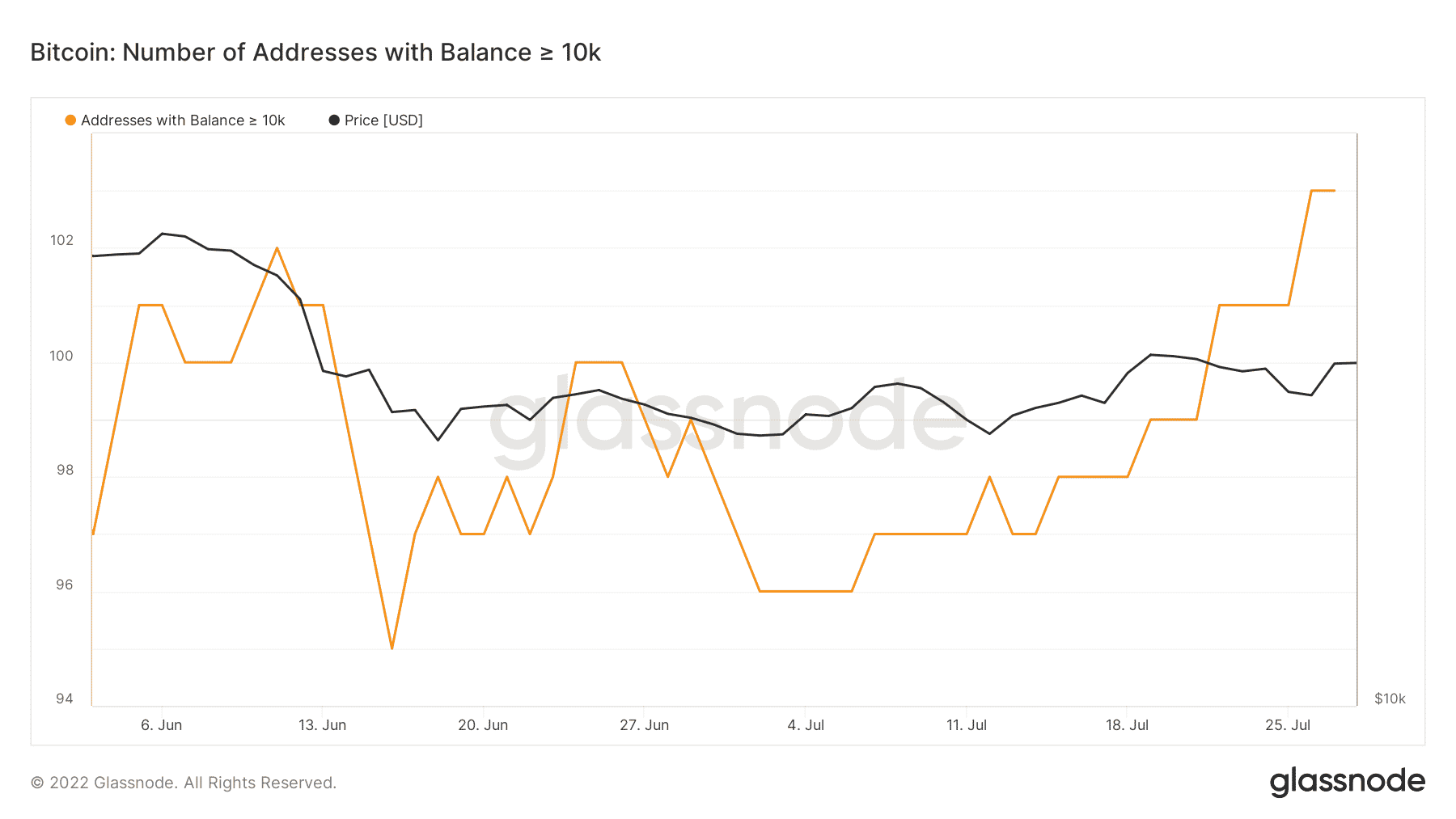 The BTC/USDT chart shows that Bitcoin could sustain the current green levels. At press time, the Relative Strength Index (RSI) indicated that the Bitcoin’s next move might remain bullish.

This projection was supported by the Moving Average Convergence Divergence (MACD). Having fallen below the mid-level, the MACD looked primed for a continuous uptick in the short term.

With the data available, BTC might continue on an uptrend over the next few hours to days. However, investors may need to watch the RSI level if it gets overbought. If it does, a downtrend could very well be on the cards.